January 29th, Bombay saw the third annual Queer Azaadi March (QAM) in history, an event which has only gotten bigger and better over the last three years. It was a perfect union of political activism and social mingling. 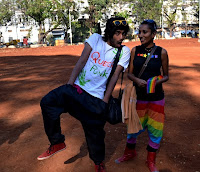 Pride Week:
The march was preceded by a whole week of festivities and this week (January 23rd-29th) was rightly declared as the Pride Week through the city of Mumbai. The events included queer themed music concerts, open mic nights, paint your own T-shirt for the march workshops, panel discussions, book readings, folk dance & graffiti wall, documentary and film screenings, play nights, fund-raisers and several parties. This allowed people to be a part of QAM through the week even if they couldn’t make it to the final march.
A Walk For Azaadi:
The march commenced from Gowalia Tank at 04:00 PM and thousands of people marched in vigour up to Chowpatty beach. Filmstar and Gay Rights activist Celina Jaitley was present to flag off the march and also in order to show her immense support and interest in the cause.
The march showed the coming together of members of the LGBT community and supporters of Gay Rights, thus representing the harmonious union of all colours in the rainbow flag. This beautiful display of unity in diversity was endearing to watch. Another thing to be noted was the creative outburst that was seen in the banners, posters, painted t-shirts that people carried in order to make a statement. The attire of a lot of people was incredibly unique and it would be correct to say that these were definitely some of the most fashionably dressed people of the city (see pictures below).

The most striking part about this year’s Queer Azaadi March was that only a handful of people wore masks. This is a sign of great things to come and only good ones for the queer folk and libertarians of the country.

History:
Gay pride marches have been an annual affair in the city since 2005. But it began to be called the Queer Azaadi March only from 2008. This year, the parade attracted record participation. One of the groups that stationed volunteers at the gate of Gowalia Tank Maidan, the starting point of the march, counted over 3,000 participants, the biggest number so far.