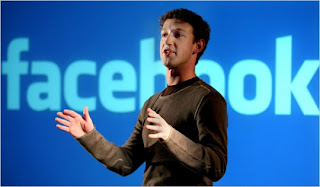 Credit: google images
With several news sites and blogs free flowing on the recent disposal about the closure of Facebook, many  people have been bogged down with the panic statement on what will happen next to their social life inside the four walls making it much more difficult to continue the ties they share at the online world.
Frenzy makes to haste... 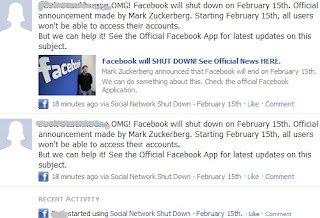 There have been many messages one is receiving in their Facebook inbox itself asking people to delete their necessary details like pictures and information or to delete their profiles itself on the so called news that Mark Zuckerberg the owner of this site has announced to shutdown this site on the D day 15th March 2011.

This has flared up people to an extent of absurd reactions to people to have already actually deleted their information and accounts.
Bafflement and rumours

The confusion aggravated as this was termed as hoax and spam but many people started relying on the positive confirming reports stated at weeklyworldnews.com a site which is known for its false statements.

This site carried a personal comment from Mark himself stating that his life has been affected by the load growing on this site and that he doesn’t care about the money involved in it so it is better that they shutdown.
Fear and Apprehension


However, as this news spread like fire among the mass of the social networking world, Mark himself came up rubbishing this comment and saying he never made such comment and this is all a rumour and that they have just begun on their journey and couldn’t think of closing down. Now it has created big flurry as many are not aware of the entire situation themselves.

People are half informed about the issue thinking that the site will be really closed down on 15th March and have started acting on it already. They are believing the spam message circulated on Facebook or just trusting the blogs and opinion rather than looking up for the news sites or researching on the topic to know the whole truth.

Priya Dwivedi a 19 year old  girl says “ I have deleted some albums from my account as I have heard Facebook is getting closed down on 15th of March.”

We can see the comments of people on Facebook itself .

There are many more people like Priya who have unnecessarily taken such actions on the fear of losing their data or the melancholy of it getting misused unduly.
Shrugging off the belief...

Whereas there are many who didn’t even bother to look up on this issue and just ignored the rumour. Arnab Gupta a Manager by profession, 25 says “ Facebook being one of the wealthiest sites cannot get shutdown by just the reason of overload. The management will surely deal with such issue if it ever bothers them so this outcry about Facebook being shutdown is utter rubbish.”

But some are still confused on that to believe and what not to believe. Aanandita an 18 year old student says “ I just don’t know whom to believe. Some friends say this is all but a rumour and some say this is true. I will probably wait for more opinions and news and see what happens to decide what to do next.”
Parental views vs  youngsters

While youngsters are disturbed by this outbreak, parents and elders seem to be quite happy by this as they think their children will now be able to have a real life outside rather than sticking on to computers day in and out and chatting away to glory.

Mrs. Rupali Mishra a 45 year old parent to her 16 year old girl says “ I would be more than glad if Facebook shuts down, atleast my daughter will have time to talk to family and play outside and do more useful things like watch news and study with concentration rather than wasting her time on Facebook by chatting and what not.”

But youngsters are not at all happy with such discretion, Damayanti Sengupta a 21 year old working girl says “Parents think we use Facebook just for pass time with no value. We have friends to be in touch with and this acts like stress buster. I have found so many friends of mine whom I couldn’t contact for years. I don’t know what I will do if Facebook really shuts down.”


All in all we can say is that with such rumours atleast we could come across different reactions of people and to see how it might affect people and financers differently. One thing is clear that the popularity of this site will always continue among parents, students, youngsters etc in their own way even if the site lives or perishes in the future.
Posted by KC BMM Journalism at 8:56 PM